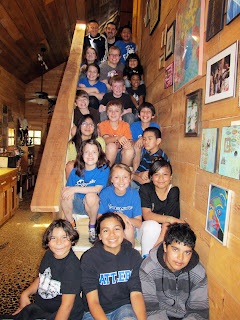 Navasota Intermediate School students in teacher Kevin Bradford’s 4th and 5th grade classes visited with the founder of a Huntsville-based building initiative called The Phoenix Commotion in April as a culminating activity to their project called House Design. The Phoenix Commotion, founded by Dan Phillips, was created to prove that constructing homes with recycled and salvaged materials has a viable place in the building industry. Phillips, whose work has been covered nationally by the New York Times, The Today Show, Oprah.com, and People Magazine, founded The Phoenix Commotion to build homes for families with low incomes, reduce the landfill burden, and train people in all aspects of construction for the purpose of building marketable skills for the workforce.

For their spring project, NIS students measured furniture and appliances and room dimensions and used that information to draw floor plans for a house for an imaginary client. They explored construction costs and other financial areas involved in building a new home. In April, students were able to visit with Phillips and tour some of the homes The Phoenix Commotion has built in the Huntsville area.

“It was fascinating,” Bradford said, “to watch as the students admired the construction, especially the floors built with bottle caps and cork, the bathroom built with broken mirror pieces, and the ceiling designed with picture frame corners.”